Cristiano Ronaldo on Tuesday returned to Manchester United training ground at Carrington for the first time since his return to the club and also met with his former teammate Ole Gunnar Solskjaer, who now manages the first team.

Ronaldo was released early from Portugal’s squad after he picked up a booking in the World Cup qualifier against Ireland. The 36-year-old netted twice in that game to become the highest-scoring player in the history of men’s international football. 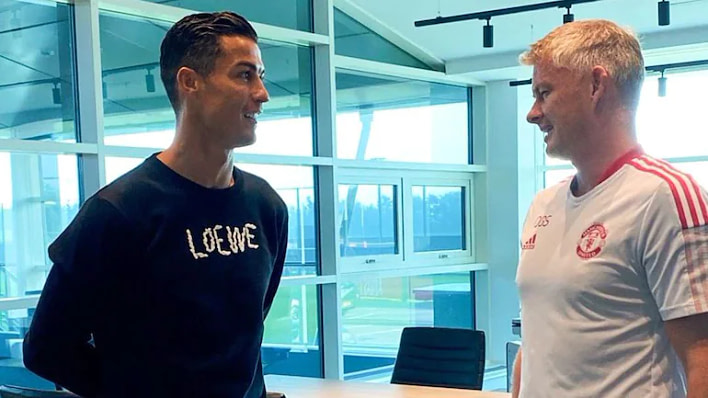 Ronaldo will be missing Portugal’s next game against Azerbaijan due to his booking because of which Portugal allowed him to leave the squad after a recovery session early Thursday.

He arrived in England straight from Portugal and quarantined for 5 days before going to Man United’s Carrington facility where he met up with manager Solskjaer and some of his new teammates.

Ronaldo’s early release from international duty should enable him to spend more time with his new United teammates ahead of his likely first match of his return, against Newcastle at Old Trafford on September 11.

The Old Trafford club said Ronaldo will wear their number seven jersey once again. Ronaldo spent six seasons at United between 2003-09, winning eight major trophies, and rejoined them this week from Juventus on a two-year deal.

Ronaldo had donned the number seven shirt during his first stint at the club, following in the footsteps of great United players including George Best, Bryan Robson, Eric Cantona and David Beckham.