UEFA Euro 2020 Final Italy vs England Football: The match finished 1-1 after extra time with Luke Shaw and Leonardo Bonucci scoring for England and Italy respectively. Follow score and updates of the Euro 2020 final between England and Italy.

The champions of the 2020 European Championship are Italy. Roberto Mancini’s side have defeated England at the Wembley Stadium on penalties. Italy prevailed in the penalty shoot-out 3-2 to win their second Euro title. Luke Shaw scored a beautiful volley inside 2 minutes to give England a 1-0 lead at half-time. Leonardo Bonucci leveled with a close-range finish as the match went into extra time. 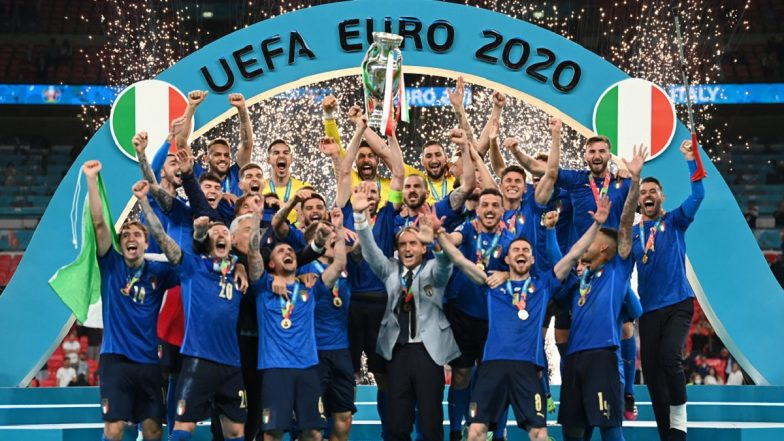 Penalties have always been a thorn in England’s history and it happened again as Italy managed to frustrate England at the Wembley Stadium in regulation time and then prevailed in the penalty shoot-out.

Gianluigi Donnarumma dived to his left and saved the decisive spot kick by Bukayo Saka, England’s third straight failure from the penalty spot in the shooutout in front of its own fans at Wembley Stadium.

It was less than four years ago that the Italians plunged to the lowest moment of its soccer history by failing to qualify for the World Cup for the first time in six decades. Now, they are the best team in Europe and on a national-record 34-match unbeaten run under Roberto Mancini, their suave coach.