Euro 2020: Germany banned from training in Wembley stadium ahead of England clash at Round of 16 - Ova Sports 24/7
Skip to content

The German newspaper BILD hit out at the decision to deny Joachim Low’s players the chance to train at Wembley the night before coming up against England in the last 16 at Euro 2020.

The newspaper has called it a “scandal” saying that it gives an unfair advantage to England, who played all three group games on their home turf. 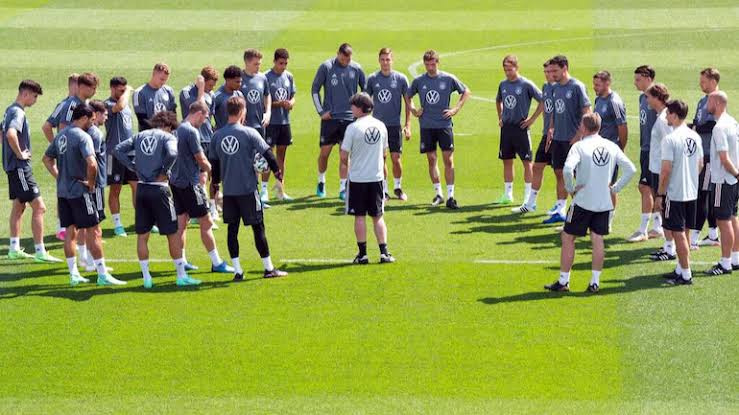 However, the move also applied to Austria and Italy prior to their match on Saturday.

According to Sky Sports News, UEFA has stressed that the decision is unavoidable and has been applied to all teams playing their Round of 16 matched at the Wembley.

Following the discussions with Wembley ground staff, the Austrian and Italian players were also prevented from training on the pitch before their knockout game on Saturday.

Thunderstorms and heavy rain are forecast for north London for the 48 hours prior to kick-off. As a result, Germany have altered their training plans and will have an extra session at their training base in Herzogenaurach, before flying to London.

England have lost to Germany in their last three knockout meetings at major tournaments, in 1990, 1996 and 2010, with the first two coming after penalty shoot-outs in the semi-finals being particularly painful.

Gareth Southgate, the England manager, famously missed the crucial spot kick in the Euro 96 loss but 12 members of his squad were not even born at that time and the oldest member of his squad, Kyle Walker, was only six.

England have yet to sparkle in this tournament. 1-0 wins over Croatia and the Czech Republic and a draw with Scotland were enough to secure progress but hardly set the pulses racing.For all the hype around this Round of 16 encounter, this has not looked like a vintage German team either.

They were unimpressive in their opening loss to France and were six minutes from defeat against Hungary and an exit from the tournament in their final group game.