Euro 2020: Harry Kane, Raheem Sterling score as England knock Germany out in Round of 16 - Ova Sports 24/7
Skip to content

England overcame arch-rivals Germany at the iconic Wembley Stadium to book their place in the quarter-finals of Euro 2020.

Gareth Southgate’s men sealed a 2-0 win with second-half goals from captain Harry Kane and in-form striker Raheem Sterling in their Round of 16 match on Wednesday. 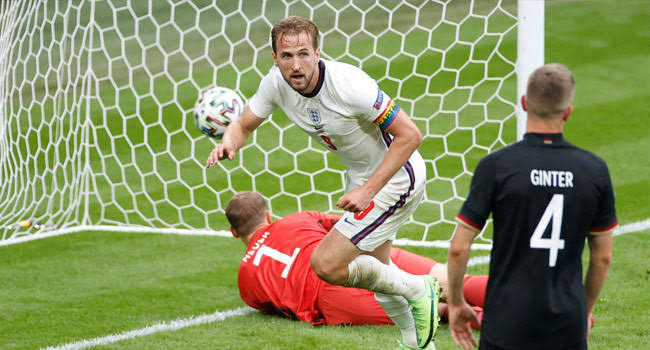 It was England’s first knockout round victory inside 90 minutes at the Euros. They will face the winner of the Round of 16 match between Ukraine and Sweden in the quarter-final on Saturday..

That was also the final game for Joachim Loew as the manager of Germany as the decorated coach had said before the Euro 2020 that he would step down. Loew, who led Germany to World Cup glory in 2014, has overseen a group stage exit at the FIFA World Cup in 2018 and a Round of 16 exit at the ongoing Euro Cup.

Harry Kane, who missed a clear cut chance towards the end of the fist-half, grew into the match and eventually scored the winner from a fine cross from Jack Grealish who was introduced in the second half.

England have beaten Germany for the first time in a knockout round of a major tournament since 1966. 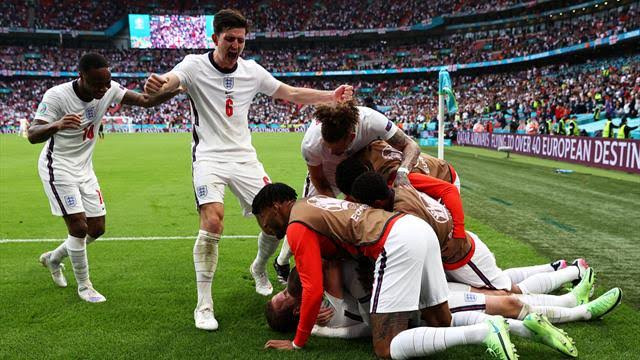 It was also the 4th straight clean sheet for England at Euro 2020 as Southgate’s men are proving their class at the back.

It was redemption time for Gareth Southgate who had missed a decisive penalty at the Wembley Stadium against Germany in the semi-final of Euro 1996. Southgate, England’s manager now, punched the air in delight as the final whistle was blown at the iconic venue. Thousands of English fans, including Prince William and Kate Middleton, roared in delight as England went past the finish line.

It was the first time since Germany have lost a knockout match at the Wembley Stadium at a major tournament since the 1966 World Cup final which England won 4-2.

Germany began well, pressing high and not allowing England any chances in their half but Harry Kane’s men grew into the game. While Timo Werner missed a chance in the first-half, Sterling’s powerful long-range effort was saved by Manuel Neuer.

England came close to scoring in the first-half when Kane got an opportunity to slot a loose ball in the box in in the 45th minute. However, the two teams headed into the break at 0-0.

While the second half started as a cagey affair, the introduction of Grealish in the 69th minute changed things for the Three Lions. Sterling broke the deadlock in the 75th minute with a fine finish from Luke Shaw’s cross.

Thomas Muller, who ended up without scoring at Euro 2020, missed a fine opportunity as she lotted one wide from a superb Kai Havertz pass.