Italy held on to their nerves and sealed a quarter-final berth at Euro 2020 after beating a spirited Austrian side 2-1 at the Wembley Stadium in their Round of 16 match on Saturday. 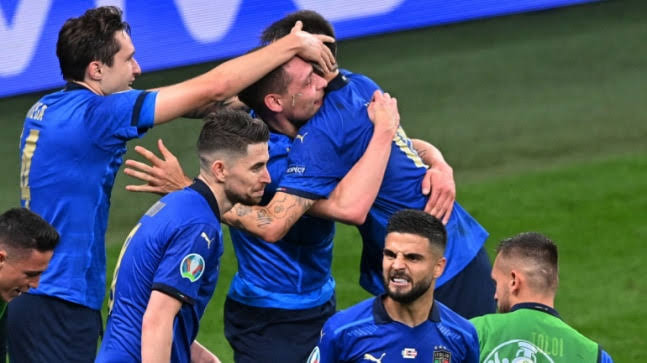 Roberto Mancini’s side, with their Round of 16 win, have broken their national record by extending their winning streak to 31 matches.

However, their run of 11 games without conceding a goal came to an end as Gianluigi Donnarumma was beaten finally when Kalajdzic pulled one back for Austria with a stunning header in the second period of extra.

Italy will now face the winner of the highly-anticipated Round of 16 match between defending champions Portugal and Belgium, in Munich on Friday.

Roberto Mancini got his tactics spot on even as a spirited Austrian side stretched them. Franco Foda’s men knew they would not be able to contain the Italian side by sitting back and defending and thus played a brave brand of football, testing the Italian backline which missed Chiellini due to a hamstring injury.

The star of the match was undoubtedly Spinazzola who was threatening the Austrian defence with his run from the back at the left. Spinazzola provided the assist by providing a superb ball to Chiesa in the extra time.

Italy got off to a strong start and hit the upright with Ciro Immobile’s powerful shot in the 32nd minute. But Austria, looking for their first win over Italy in 62 years, grew bolder after the break and put the ball in the net through Marko Arnautovic, only for his 65th-minute header to be ruled offside after a VAR review.

They ran out of steam, however, early in extra time allowing Chiesa far too much time and space in the 95th to control a Leonardo Spinazzola cross in the box and rifle home from a tight angle.

But Austria did not give up after going 2-0 in extra time as they kept putting the ball into the Italian box, forcing some fine saves from Donnarumma.

In the end, Austria fell short on Saturday but they can keep their heads high after that stunning performance against one of the tournament favourites.