Italy continued their invincible run as they established themselves as firm favourites to win Euro 2020 by knocking World No. 1 Belgium in the quarter-final in Munich on Friday.

Goals from Lorenzo Insigne and Nicolo Barella gave Italy 2-0 lead while Romelu Lukaku’s goal from the sport was not enough as Italy beat Roberto Mancini’s side in a fiercely-ontested match. 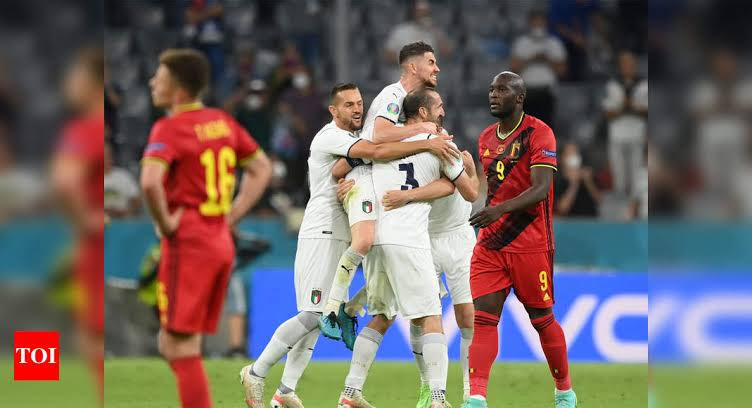 It was heartbreak for Belgium’s golden generation as they failed in the knockout phases of a major tournament once again.

The quality of this Roberto Mancini’s side is not in question but their inability to go past the final hurdles once again brings up the dreaded ‘C’ tag. After going out in the Euro 2016 quarter-finals, Belgium were ousted in the semi-final at the FIFA World Cup in 2018.

Despite not having captain Eden Hazard, Belgium came up with a valiant fight with the likes of Kevin de Bruyne, Jeremy Doku and Romelu Lukaku threatening to trouble Italy but the Giorgio Chiellini-led Italian defence was up to the mark on the big night.

Cut to 2021, Belgium had established themselves as one of the threatening forces and rose their way up to FIFA No. 1 spot. However, it all came to nothing as the Red Devils bottled it up at the big stage.

Italy extended their unbeaten run against Belgium to 5 matches in major competitions as Roberto Mancini’s side proved their all-round class on the pitch. With Chiellini returning to combine with Banucci in the central defence, Italy were tough to break down in the 2nd half where they defended their 2-1 lead.

The frenetic last 5 minutes of first half

Italy opened the scoring in the 31st minute when Barella picked up the ball, forced his way past defenders in the area and fired home. Insigne doubled the lead in the 44th minute after collecting the ball on the left and skipping beyond a defender before unleashing a long-range shot that flew past Thibaut Courtois.

Romelu Lukaku clawed a goal back for Belgium from the penalty spot just before the break after Giovanni Di Lorenzo put an arm on Jeremy Doku and pushed him to the ground.

On another day, Romelu Lukaku would have had a hat-trick. The Inter Milan forward, who rued not being labelled as one of the modern-day greats, failed to be clinical in the attacking third in open play as he missed two clear-cut chances in the second half.

While Gianluigi Donnarumma was on top of his form at the Italian goal, Lukaku could have beaten the in-form goalkeeper at least twice. Kevin de Bruyne, who returned to the side after passing a late fitness test, provided a superb cross to Lukaku in the second half only to see the forward fluff it.

He also missed a good header at the far corner after a fine ball in from substitute Dries Mertens in the 70th minute.

How much are Italy going to miss Spinazzola?

Has there been a better left-back than Leonardo Spinazzola at Euro 2020. Spinazzola once again made those stunning run forwards and threatened the Belgium defence. He hurried back whenever there was danger at the back and he played a crucial role in fending off a second goal from Lukaku.

However, towards the end of the match, Spinazzola went down on the pitch, holding his hamstring. He was in tears after realising the injury could be the end of his tournament.