Ukraine booked a place in their fist-ever quarter-finals at a European Championship by beating much-fancied Sweden in the last Round of 16 match of Euro 2020 at the Hampden Park in Glasgow on Tuesday.

Andriy Shevchenko’s men fought hard with the grit that defines their coach as they came up with a confident approach. In fact, Ukraine qualified for the Round of 16 with a third-place finish in Group C despite a negative goal difference, thanks to Sweden who topped Group E with a win over Poland in their final match day. 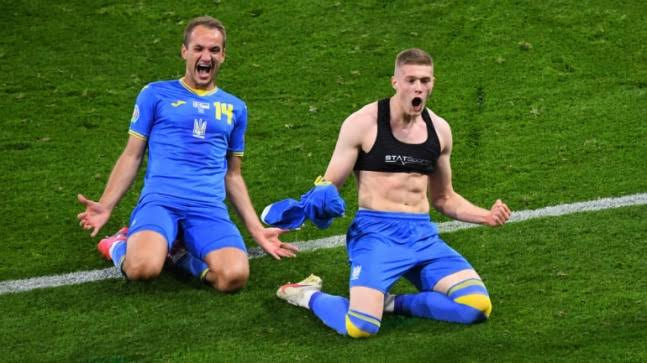 And there was no goodwill gesture from Ukraine as they knocked Sweden out after an action-packed 120 minutes in Glasgow.

Artem Dovbyk netted in stoppage time at the end of extra time as Ukraine squeezed past 10-man Sweden 2-1.

There was plenty of quality as both sides went for the win in the 90 minutes of normal time. Oleksandr Zinchenko’s left-footed half-volley after 27 minutes gave Ukraine the lead but Emil Forsberg equalised when he hit home a deflected effort from the edge of the penalty area two minutes before halftime.

Forsberg, who took his tally to 4 goals at Euro 2020, could have added more had he not hit the woodwork twice before the whistle was blown.

The two sides were level at 1-1 after 90 minutes but the tide of the last-16 game changed when Sweden had defender Marcus Danielson sent off for a studs-up, high challenge nine minutes into extra time. Danielson’s sending-off changed the way Sweden played as they had made 3 changes just before the red card was handed after a VAR check.

It looked like Ukraine would waste the advantage of having an extra man as they were not able to create clear-cut chances but Artem Dovbyk scored the decisive goal from a superb cross from Zinchenko.

Ukraine will take on England in Saturday’s quarter-final in Rome.